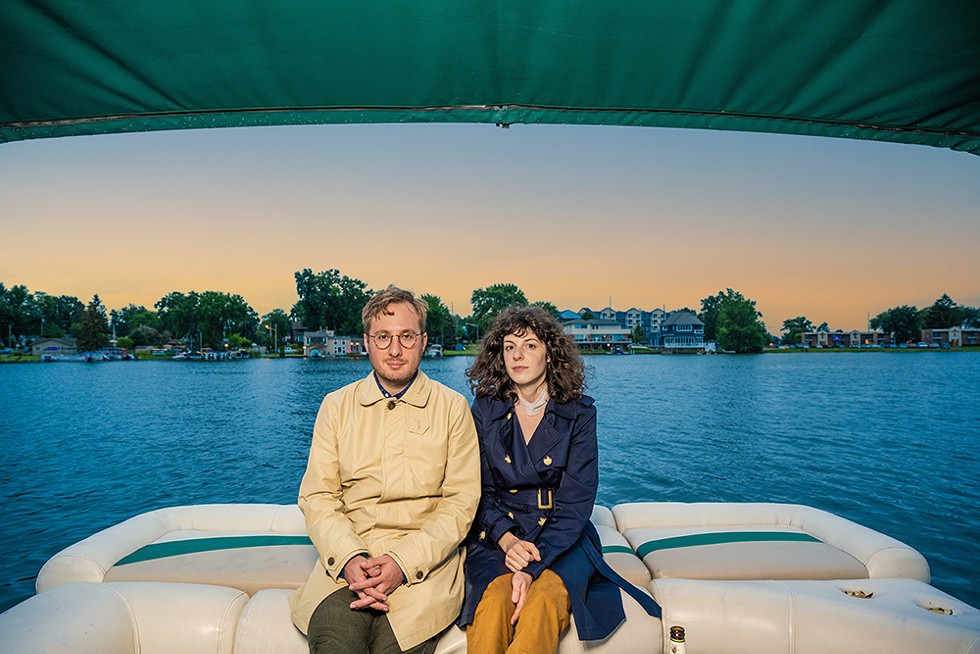 Keego Harbor is also nestled in between one of Michigan’s wealthiest communities (Bloomfield Hills) and a community gutted by the shuttering of American auto manufacturing (Pontiac). Keego Harbor and Sylvan Lake were unique for being a small blue-collar enclave where the dream of a modest home and weekends on the lake existed. Mom-and-pop businesses lined Orchard Lake Road on the south end of town.

Today Orchard Lake Road is mostly populated by strip malls. There are plans to replace the trailer park on Cass Lake with luxury apartments. The homes on Sylvan Lakes these days are much more upscale. To borrow the title of the very Teenage Fanclub-esque song from his new album, it’s turning into a “Condo Lakeshore.”

It’s America in a nutshell, and the perfect bittersweet starting point for Milia’s songwriting. Milia is a freakishly eloquent, honest, and vivid storyteller. His songs are all a small journey unto themselves. One of the great treats of Milia’s songwriting is his delight in conjuring up unlikely rhymes to humorously and poignantly paint a picture.

Take “Me and My Sweetheart” from the new album: “Me and my sweetheart unstoppable/ we were born in the same hospital/ about four years apart/ brought back to modest homes/ in the shadows of the soccer domes/ our mothers clung to cordless phones/ as the summers all began to drone by.”

Milia recorded the new album during the pandemic at the Ypsilanti studio of Ben Collins, a formidable songwriter and guitarist in his own right as the frontman of the shoegaze band Minihorse. But he’s also a brilliant producer and collaborator, joining Milia on drums, bass, and vocals on the album.

Collins’ skill at multi-tracking vocals is a highlight of the record. Milia’s wife, Lauren, joins him on vocals, and the pairing is pop perfection. The other great highlight of the record is the virtuoso cosmic country steel guitar playing of the Scrappers’ Pete Ballard. The sound of his playing is the embodiment of late-night drives amid the ghosts of Detroit’s manufacturing heyday. Frontier Ruckus collaborator Ryan Hay rounds out the recording on piano, channeling his best Nicky Hopkins on the title track.

Milia and I both spent our youth in Sylvan Lake, though decades apart. We met up for a long-discussed pontoon boat ride with his wife and his childhood friends Erik and Alaina. We took photos, told tales of teenage shenanigans, and Matt and Lauren sang a song as we drifted on the lake. Did I mention that Matt’s guitar (like most of them) is a made-in-Michigan Gibson? Meanwhile, I chugged a Faygo Red Pop in honor of my 13-year-old self.

Metro Times talked to Milia via email about his new album. (What we talked about on Sylvan Lake stays at Sylvan Lake.)

Matt Milia: I simply write too many songs. And they all start with the exact same motivation — to process my world and my memory into something that feels a bit more manageable, that I have a bit more agency over. But they tend to end up in a few different stylistic buckets. The past few years I’ve reserved the ones that have felt like hyper-personal memory collages for solo use and slated the ones with more of a universal gravitas for Frontier Ruckus.

MT: Are your solo albums kind of a pop side project?

Milia: Around 2013 when I moved to Hamtramck, I inexplicably moved a bit away from folk and fell in love with power-pop — the pure melodic focus and more direct lyrical style, though it hasn’t really made me write less words! But poppy harmonies and hooks. Tambourine and 12-string jangle. I feel more comfortable going there solo than shoehorning Frontier Ruckus in that direction, which obviously has a very established musical identity that I cherish too much to tamper with.

Milia: My songs are so dense with lyrics that, in the brief moments in which I’m not spewing imagery, I like to reward the listener with dulcet, virtuosic musicianship. Those guys all fit the bill!

MT: What was it like recording during the pandemic?

Milia: I owe it all to Ben Collins. I’m so fortunate that in one little room in Ypsilanti, Ben has a tape machine, a drum kit, and most of all, his brilliant musical mind and technical prowess to afford me this creative outlet. Lots of Walgreens COVID tests. But we got it done.

MT: I think Ben Collins is easily one of the best producers in Michigan. What do you enjoy most about recording with him?

Milia: We arrange songs together almost telepathically. He can shred like SRV, with the computational skills of Carl Sagan. He’s just such a good musician and technician — both sides of the brain. And he’s patient with me, and we laugh a whole lot.

MT: I hear a lot of Big Star, Teenage Fanclub, All Things Must Pass, and the first Flying Burrito Brothers album — what other inspirations am I missing?

Milia: I definitely didn’t want to shy away from a country-pop sound this time around, recruiting Pete Ballard, a Detroit steel guitarist that I’ve idolized for over a decade. His steel lines make the album for me. And my old friend Ryan Hay on piano. So yeah, it’s got a bit of Gene Clark, Michael Nesmith, even Judee Sill going on. But I was also listening to a lot of Randy Newman and XTC.

MT: In what ways is this a marriage record?

Milia: It’s such a marriage record! Lauren and I were married a few weeks before the world shut down. With the honeymoon canceled, obsessing over these songs became my means of staving off that insanity everyone felt closing in. That’s why so many of the songs celebrate the redemptive power of love in unpredictable times. Friends have commented that these are my first proper “love songs.” And Lauren’s voice on the record is really the element that breaks my heart in the best way and represents such completeness. 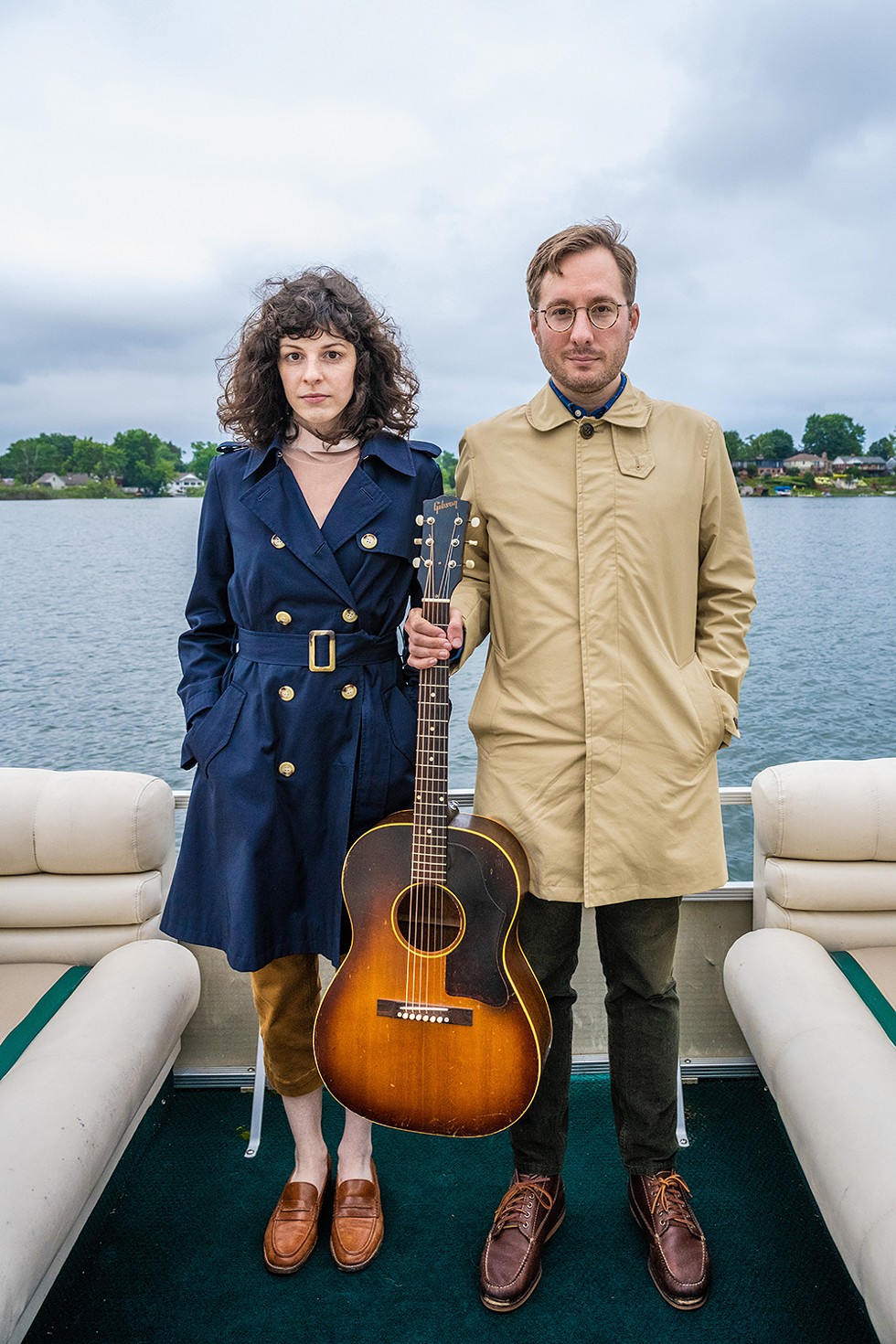 MT: Has having “a real job” changed your writing much?

Milia: Apart from using Keego Harbor as a sort of existential metaphor, I think the album works on another level as commentary about my own professional misgivings — coming to an end of a decade as a touring musician and prolific songwriter and wondering where it’d gotten me. Finding myself in an unrecognizable musical landscape. Somehow teleported into a career where I’m writing national car ads and weirdly excelling at it. “Someday I think I’ll move back to Keego Harbor” almost became an anthem of recalibrating one’s expectations and finding joy in the very simple basics of life once again. Realizing that what you were chasing so steadfastly wasn’t the thing that was going to make you happy. That it was never “show business” that really appealed to me. It was the simple act of writing songs about my odd local world.

MT: Would you really move back to Keego Harbor? You seem pretty rooted in Detroit these days.

Milia: A part of me would like to move back there, to walk in a daze through Dollar General parking lots at dusk feeling a faint poetic sense of belonging, but I’m not sure it’s the part of me that should be indulged. Detroit offers me a healthier grasp on reality.

MT: There is a strong sense of nostalgia for Keego Harbor and Sylvan Lake on the record that really resonates with me, having spent my teenage summers there. What is it about the area that you love so much?

Milia: My parents met at a bar in Keego Harbor called The Back Seat Saloon that existed in the ’80s. So the record uses Keego Harbor to talk about generational themes. All the good and not-so-good kinds of emotional inheritance. Keego Harbor just happens to be the specific location that houses my memory. So I glorify the lakes and the wave runners. The Dairy Queen and the trailer park. I can take any aspect along Orchard Lake Road and mythologize it in verse. But the beautiful thing is that everyone has those specifics. And they can hopefully do a bit of translation to arrive at more universal notions of hope and fear, love and frustration.

MT: That line, “In Keego Harbor it’s all possible,” from the title track hit me pretty hard. For me, that seems like more of a wish or the recollection of a young person’s idealism. Agree or disagree? Keego Harbor to me seems like an example of the slow death of the American blue-collar dream.

Milia: Yes, I think you’re supposed to feel a bit of pathos in that line. Like the speaker (me) is almost trying to convince himself of a hopeful outcome more than the audience. Keego Harbor is in many ways a suburban no-man’s land caught between Bloomfield’s affluence and Pontiac’s abandonment. But that tension is what gives it psychological interest to me. People see Detroit’s northern suburbs as this monolithic culture (or lack thereof). But it’s actually a fertile land rich with complex humanity, tragic storylines, and late-capitalist malaise. The mingling heaviness and beauty and crushing empathy of it all have long been my main creative thrust.

MT: Your songs celebrate the beauty in seemingly mundane everyday things. Who are some writers and songwriters who inspire you in that way?

Milia: Filmmakers like Terrence Malick or David Lynch who can make a sidewalk feel like a cosmos. I see novels like Winesburg, Ohio by Sherwood Anderson as a paragon of elevating small-town banality to a spiritual realm. Jonathan Richman.

MT: Tell me about the handmade lyric book for Keego Harbor you’re selling. Do you have any future book plans or dreams?

Milia: I just like offering something handmade as part of a release. It’s become part of my M.O. that fans seem to appreciate. A simple handwritten lyric booklet with a sewn binding and photo prints of 35mm shots I’ve taken around Keego. What I really want to pursue is a large coffee-table book of lyrics to my 120+ songs. But I won’t be writing that out by hand!

Milia: We also managed to record the sixth Frontier Ruckus album during the pandemic with Ben Collins. I think it’s one of our strongest albums. I sort of see it as a return to The Orion Songbook’s rawness. The sound of people playing together in a room, bleed and all. David’s banjo playing and Zach’s horn parts are also on a whole new level.

When the Keego Harbor vinyl and CDs arrive, we’ll schedule an album-release show!

Keego Harbor is out Friday on all streaming platforms. You can order it on vinyl or CD at matthewmilia.com.

Next Post
D.C. Memo: You look happy and healthy (from vaccine) 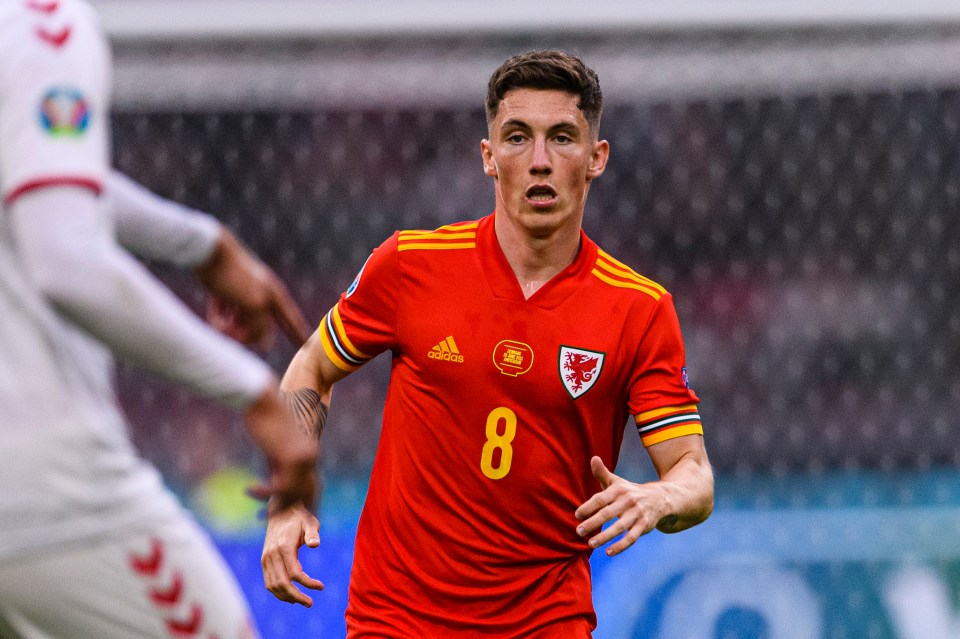 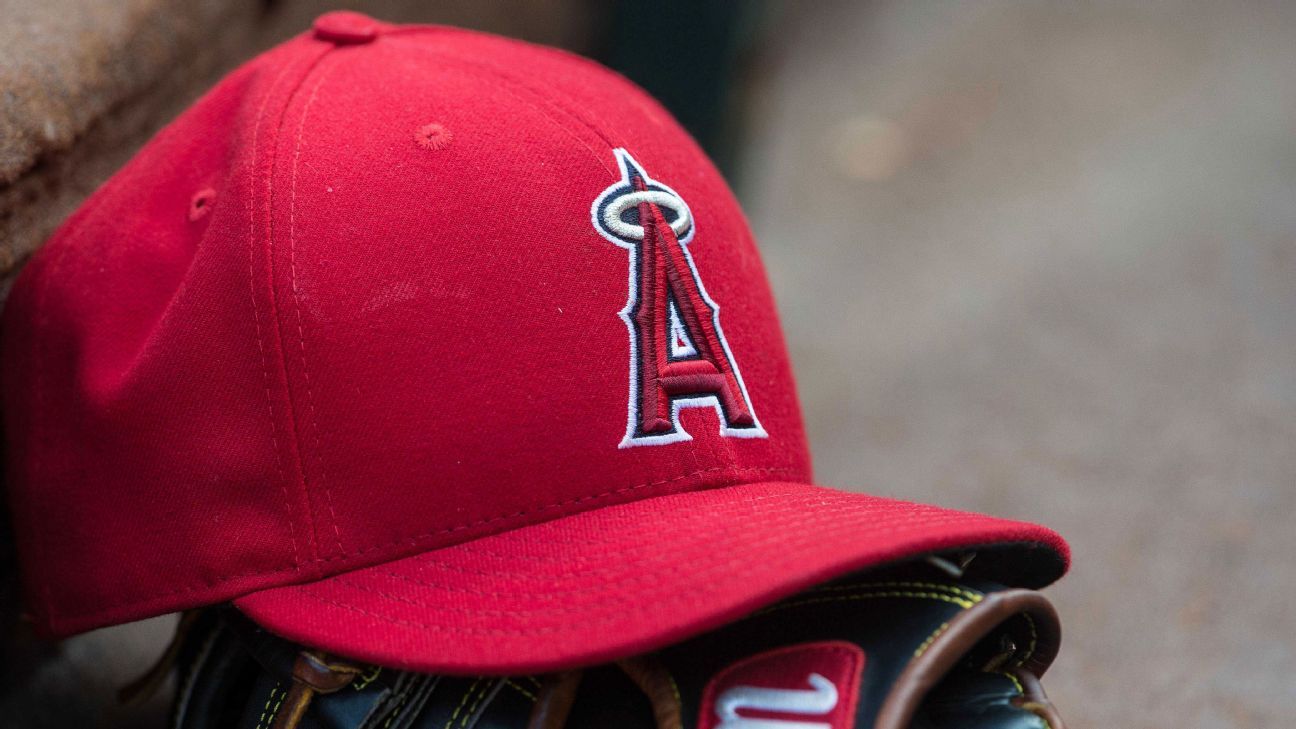 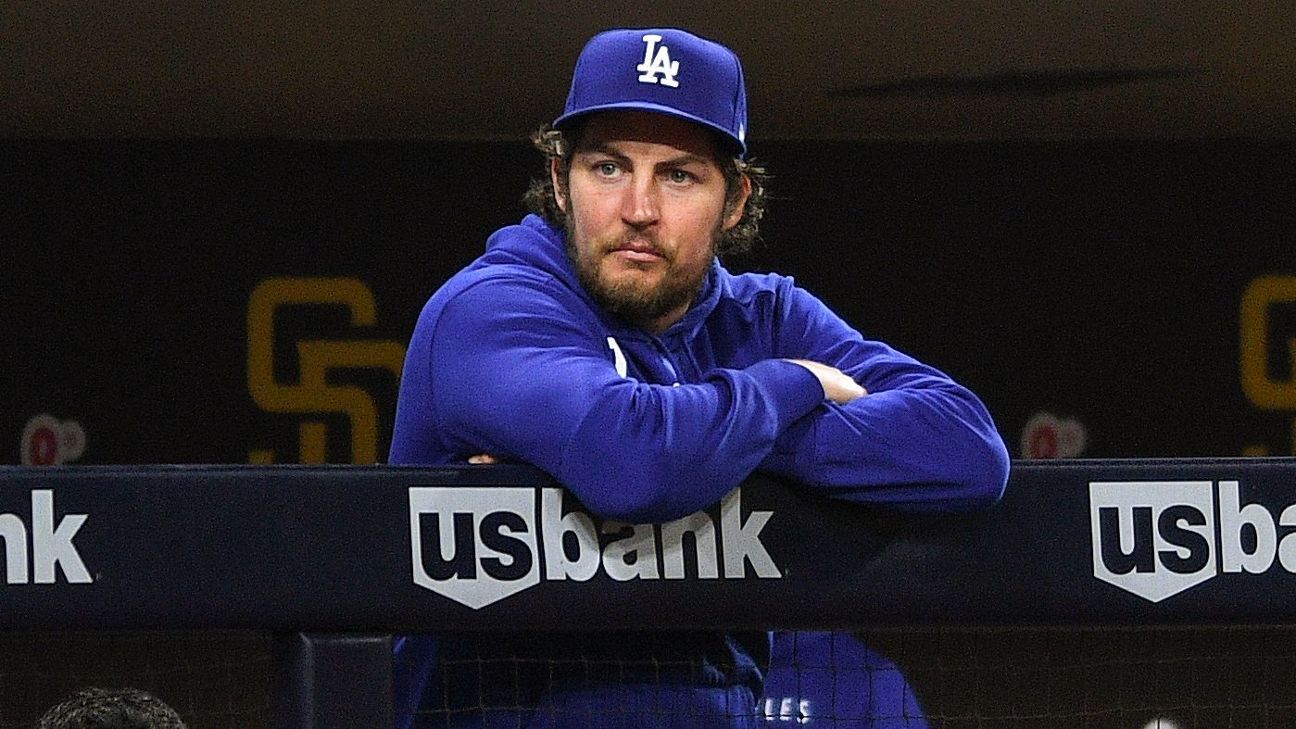 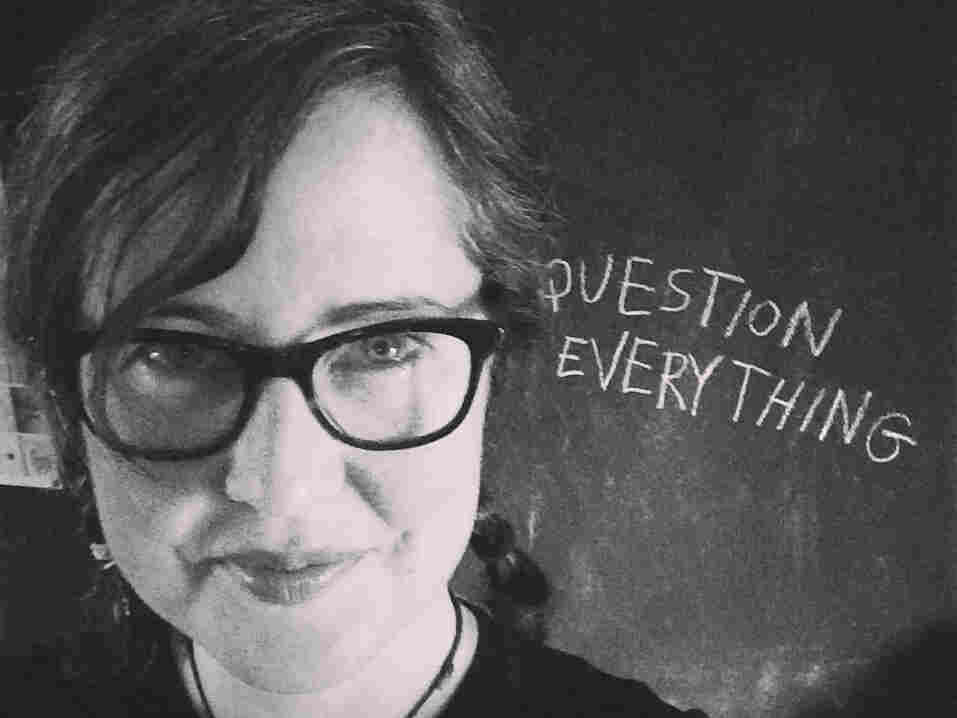 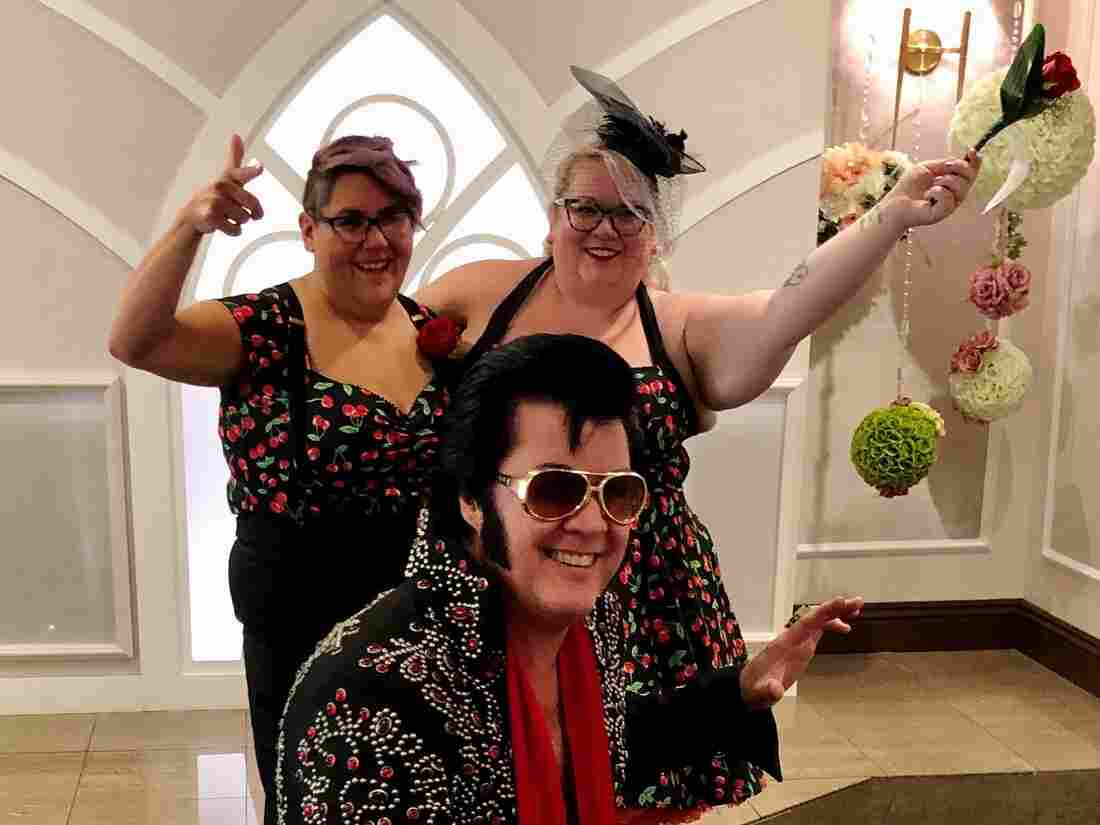